Beers full of character for every occasion

THE MOST BEAUTIFUL THING ABOUT MUNICH IS THE ROAD TO AYING

With this brash slogan, the Aying brewery, run by the Inselkammer family for over 130 years, advertised its beers many years ago. And indeed, in the small village southeast of Munich, one finds such a living Bavarian beer culture, embedded in a picture-book landscape, that this slogan seems quite appropriate. In addition to the church and the maypole, the village is characterized by the Aying Brewery Inn, the Sixthof Home House and the well-known Ayinger Bräustüberl. Today, the brewery is run by the sixth generation of the Inselkammer family, and the time-honored brewery inn by the seventh.

The superiority of the large corporations, fed by many millions in advertising, offers a decisive gap in the market, which the Ayinger Privatbrauerei specifically occupies. With a conclusion that is as simple as it is clever: beer brewed according to the Bavarian Purity Law is a down-to-earth, a traditional product. Especially in Bavaria. A sense of belonging to one’s homeland, regionality, honesty, and craft orientation are just a few of the terms associated with the art of brewing in this country.

INGREDIENTS FROM THE REGION

Franz Inselkammer junior, the sixth brewer of Aying, says: "We are very proud of our homeland and deeply rooted in it. Anyone who spends one euro on an Aying beer can be sure that 85 cents will go back into the region – for example, to our farmers, craft businesses, in the form of support for our local clubs, etc. We know that our grain grows in the surrounding area, the water comes from our own deep well and the hops come from the Hallertau region. That secures jobs and purchasing power in our surrounding area."

It is particularly important to him that you can taste that the ingredients come from the region. This, he says, makes Ayinger beers a top Bavarian product, the likes of which are hard to find elsewhere. Over all the years, the Ayinger Privatbrauerei has stuck to a wide range of varieties, with each type of beer being brewed traditionally according to an old recipe. This results in very characteristic, original beer specialties brewed to perfect quality in state-of-the-art production facilities. The nine regular varieties are complemented by four seasonal beers as well as mineral water from the company’s own deep well. 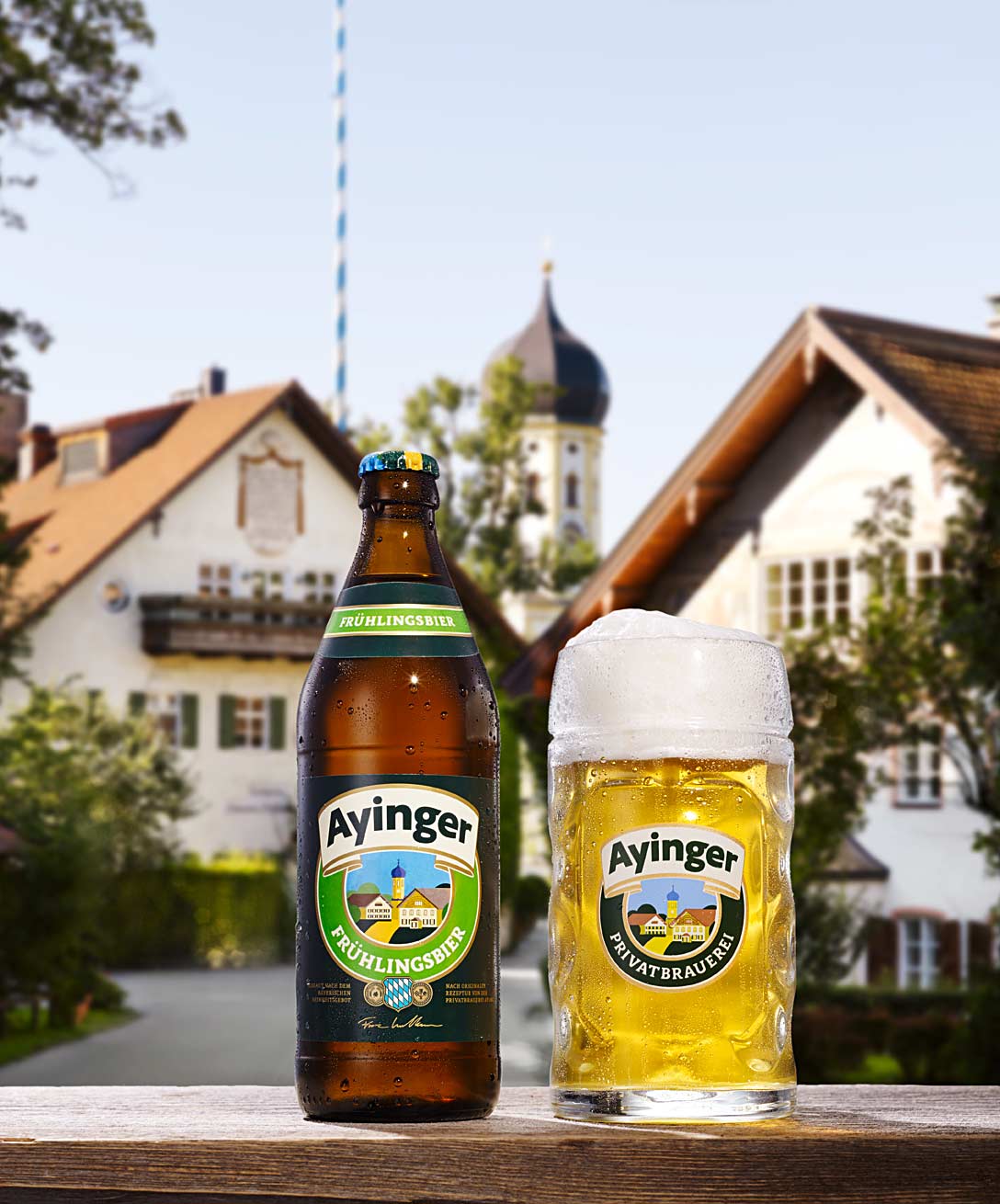 We serve this naturally cloudy beer speciality from the beginning of March for a short time only.

Its cereal-malty aroma is accompanied by a fine yeasty-floral fragrance. It is a fresh, full-bodied beer with a hint of astringency - a beer that heralds the arrival of spring according to Bavarian beer tradition. 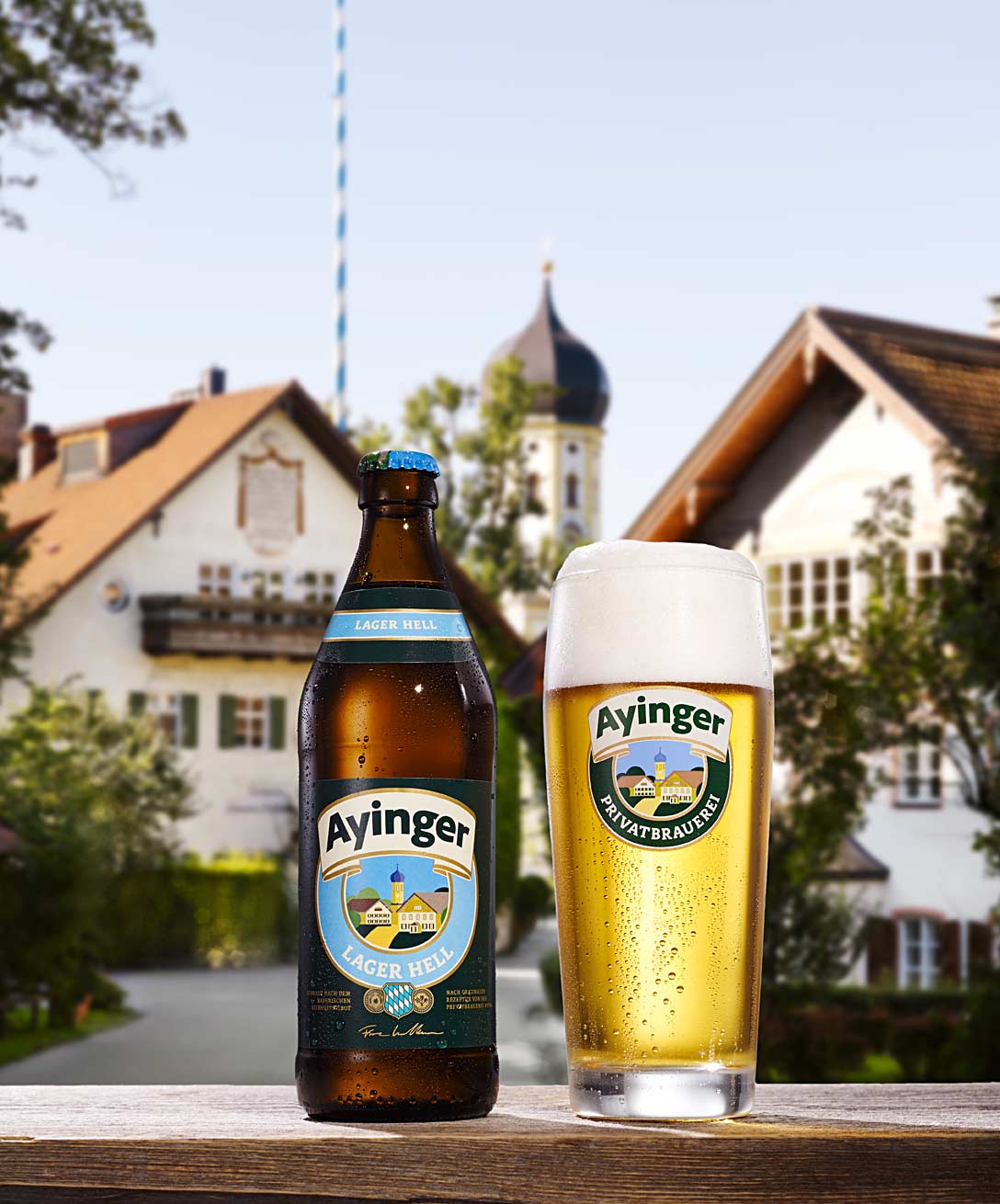 With a refined recipe, our classic is characterized by a beautiful, light golden hue. After an initial light maltiness, our Lager Hell develops a pleasant hop bitterness.

The very good recency and a subtle finish leave a small trace of bitterness on the tongue and palate. A full-bodied, fresh and drinkable beer. 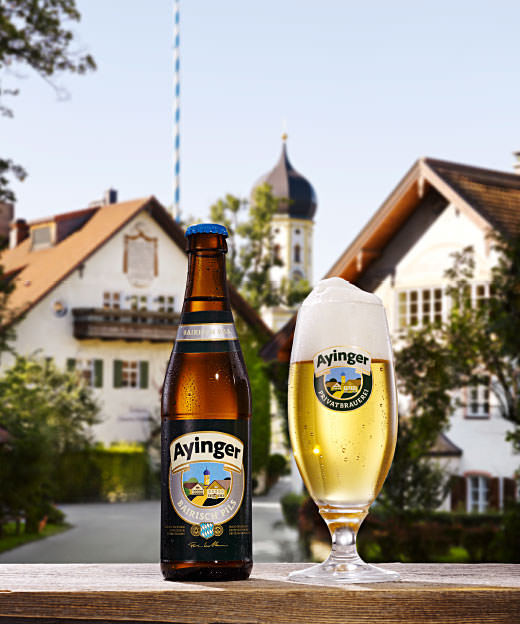 The bright, light yellow Ayinger Bairisch Pils is highly fermented and therefore slender on the palate, but also mild and tangy in body.

It impresses with the florality of the Hallertau hop aroma and shows an accentuated, noble bitterness in the finish, which quickly subsides. 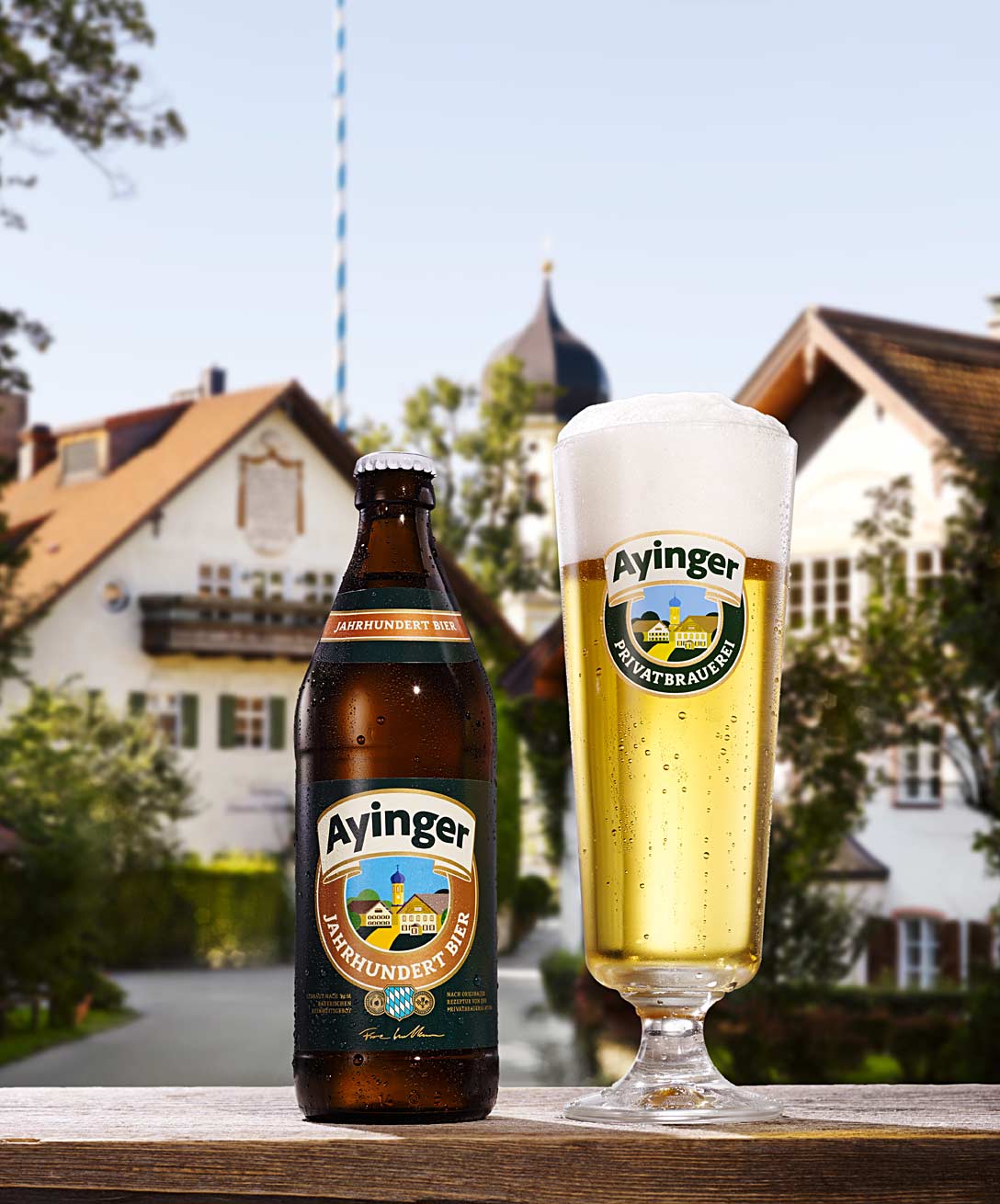 This light export beer of golden yellow color was first brewed in 1978 for the 100th anniversary of our brewery. Unmistakable is the slight smell of yeast and honey. It is spicy and full-bodied on the palate, and mild and mellow with a fine tanginess in the main drink.

In the finish, it ends nicely smooth and round with a well-tuned bitterness. It is a particularly harmonious and drinkable beer that emphasizes the delicious, earthy quality of the malted barley. 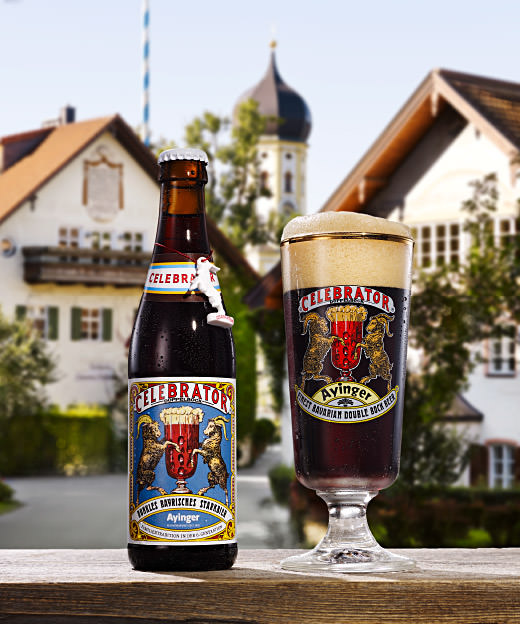 This multiple award-winning Doppelbock is the dessert beer among our beer specialties. Its deep mahogany color tends toward ruby red.

The sensationally firm foam is surrounded by a nutty, caramel aroma and a hint of cedar. A velvety, full body is accompanied by spicy flavors on the finish.

Ayinger Celebrator is a full-bodied stout that is continuously voted among the best beers in the world in annual international rankings. 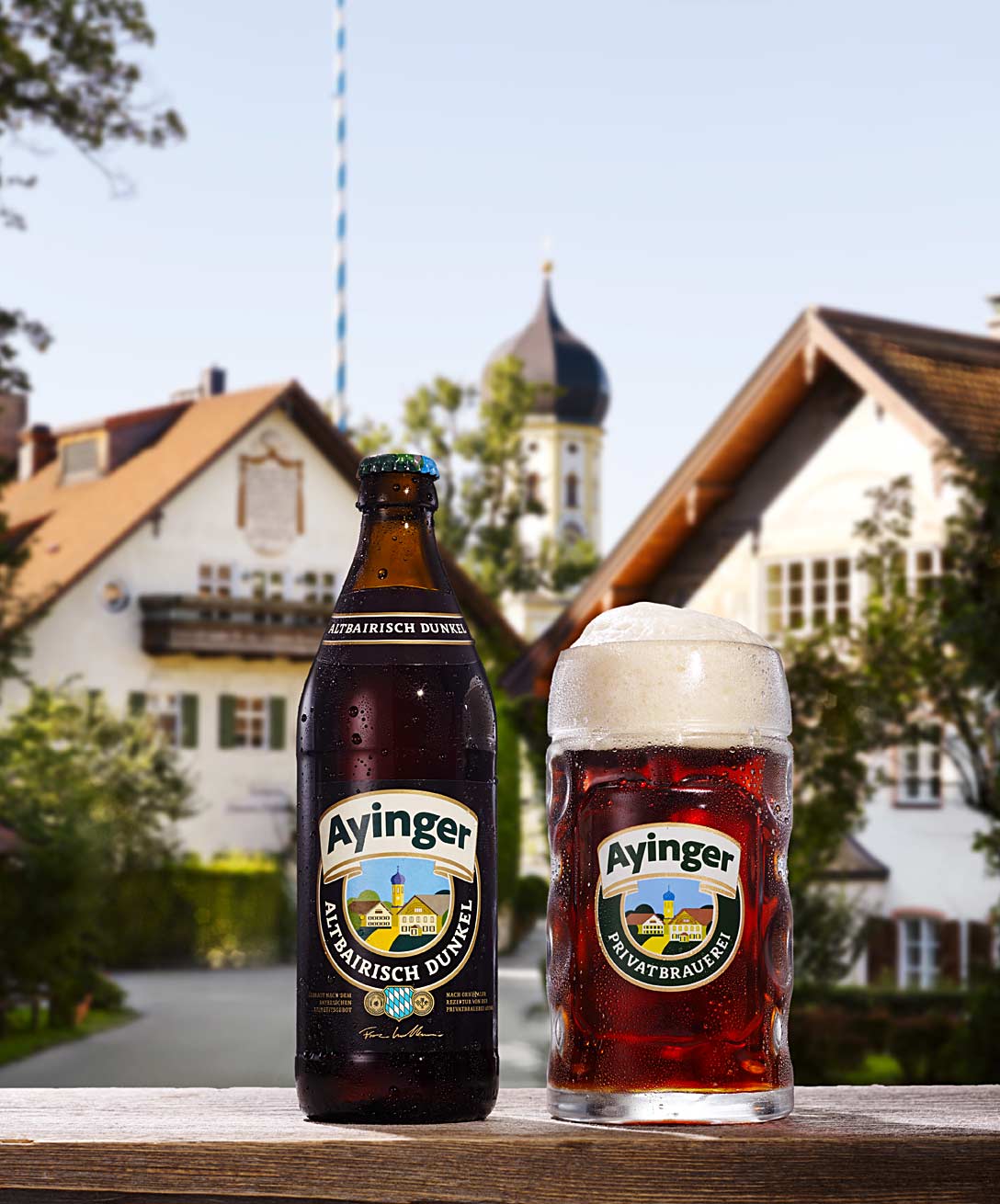 A deep mahogany hue with a golden-brown sheen, which comes exclusively from the malt, is characteristic of this dark export beer. Produced in the traditional two-mash process, it is brewed from five different malts.

Two of them are special dark malts kilned according to old Bavarian tradition. This Ayinger beer specialty with its warm, nutty aromas drinks full-bodied and smooth.

The long finish delivers light notes of cocoa bean and coffee. A beer of wonderful balance in taste. 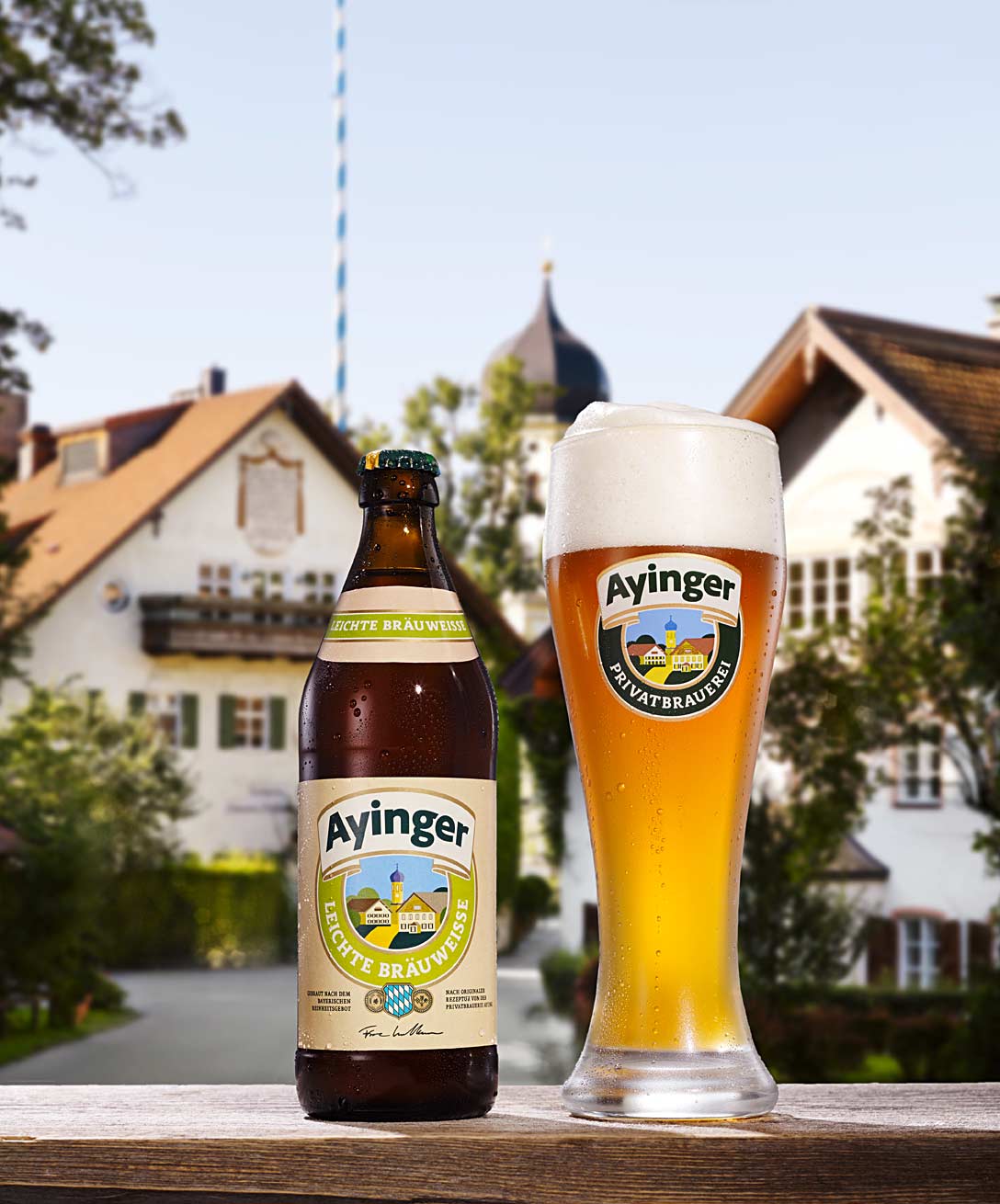 A top-fermented, yeast-cloudy wheat draft beer with a full Weissbier flavor and 40% less alcohol or calories without having to forego the full, quintessential Weissbier taste.

The high brewing school in Aying allows only enough fermentable sugar to be produced from the mash to ensure that the desired alcohol content is not exceeded. The full range of flavors is thus preserved. 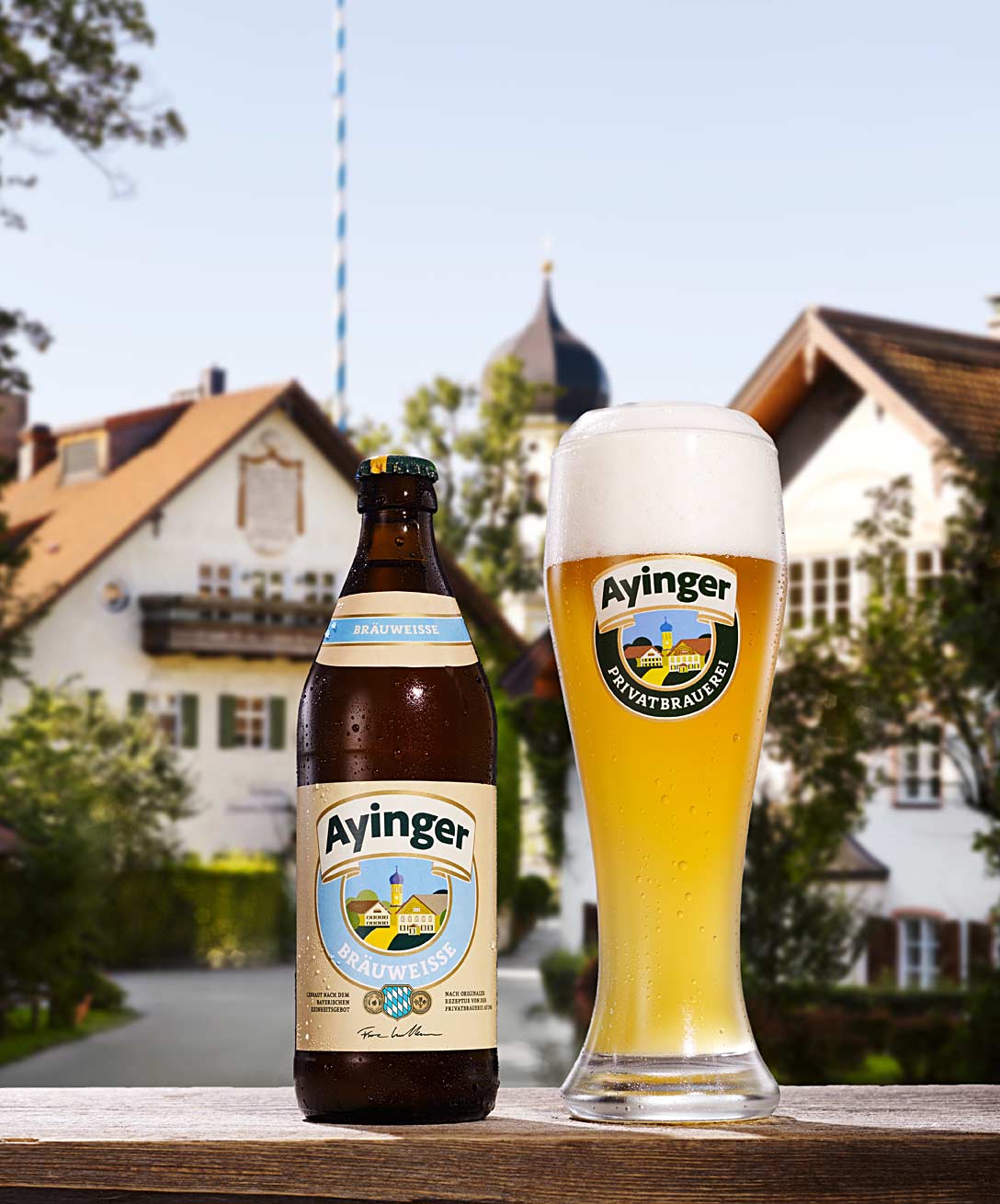 A beer of bright golden hue and a fine head. A gentle top-fermented yeast flower and a distinctive banana aroma are characteristic of this yeast-cloudy, pale wheat beer. On the palate, it is velvety, smooth and mild with a refreshing champagne-like hoppiness.

The full body of this beer is accompanied by delicate spicy-fruity citrus notes in the finish. 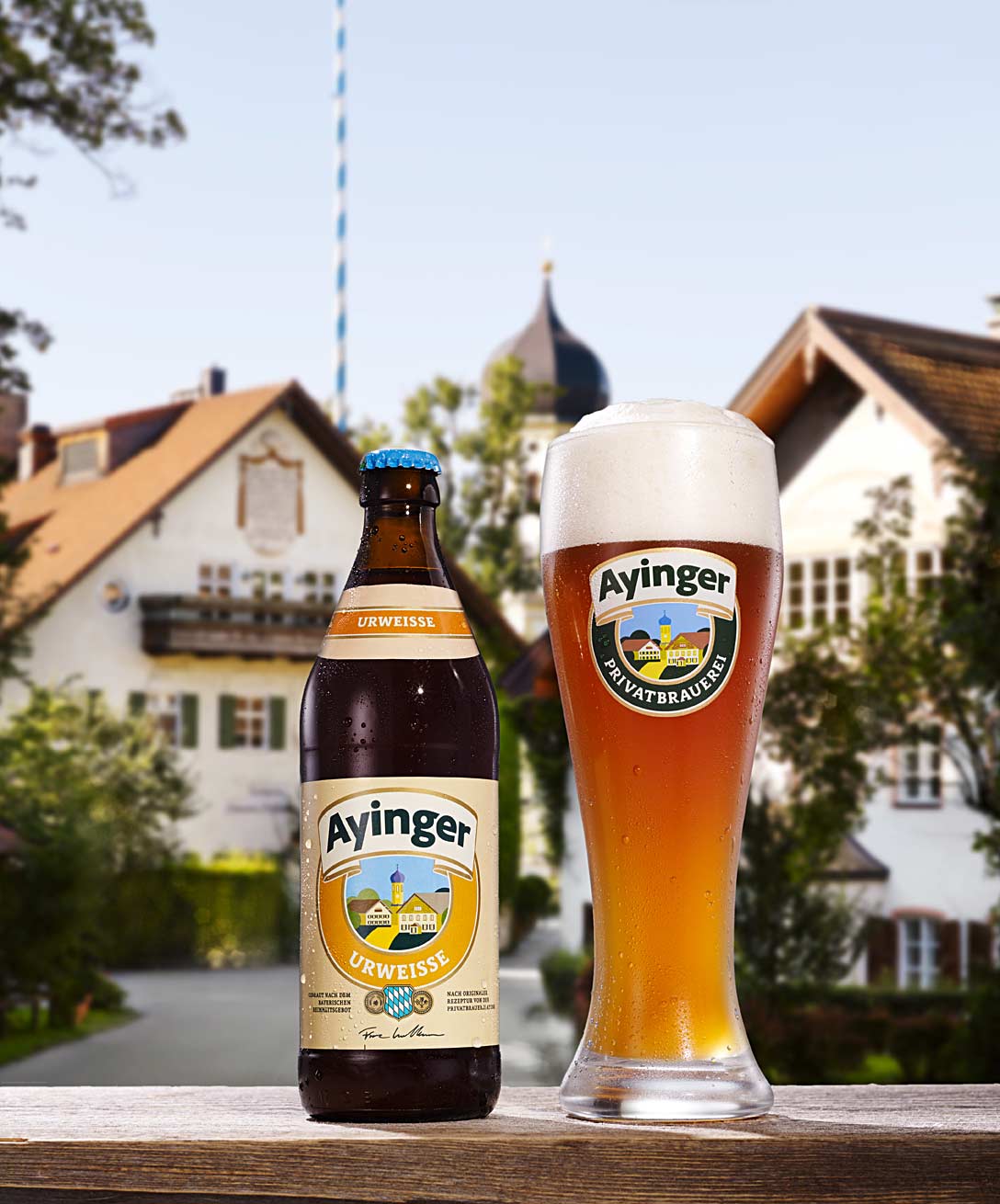 Brewed from the finest dark wheat and barley malt. This is where the noble amber color, an extraordinary foam strength and the unmistakable top-fermented, yeasty and malty aromatic taste comes from.

Ayinger Urweisse has a fruity, tart body with hints of orange and banana aromas. It is strong on the palate, with a sparkling tartness and low bitterness. The combination of wheat freshness and dark malt is crucial to its unique fullness of flavor. Three-time gold medal winner at the "European Beer Star". 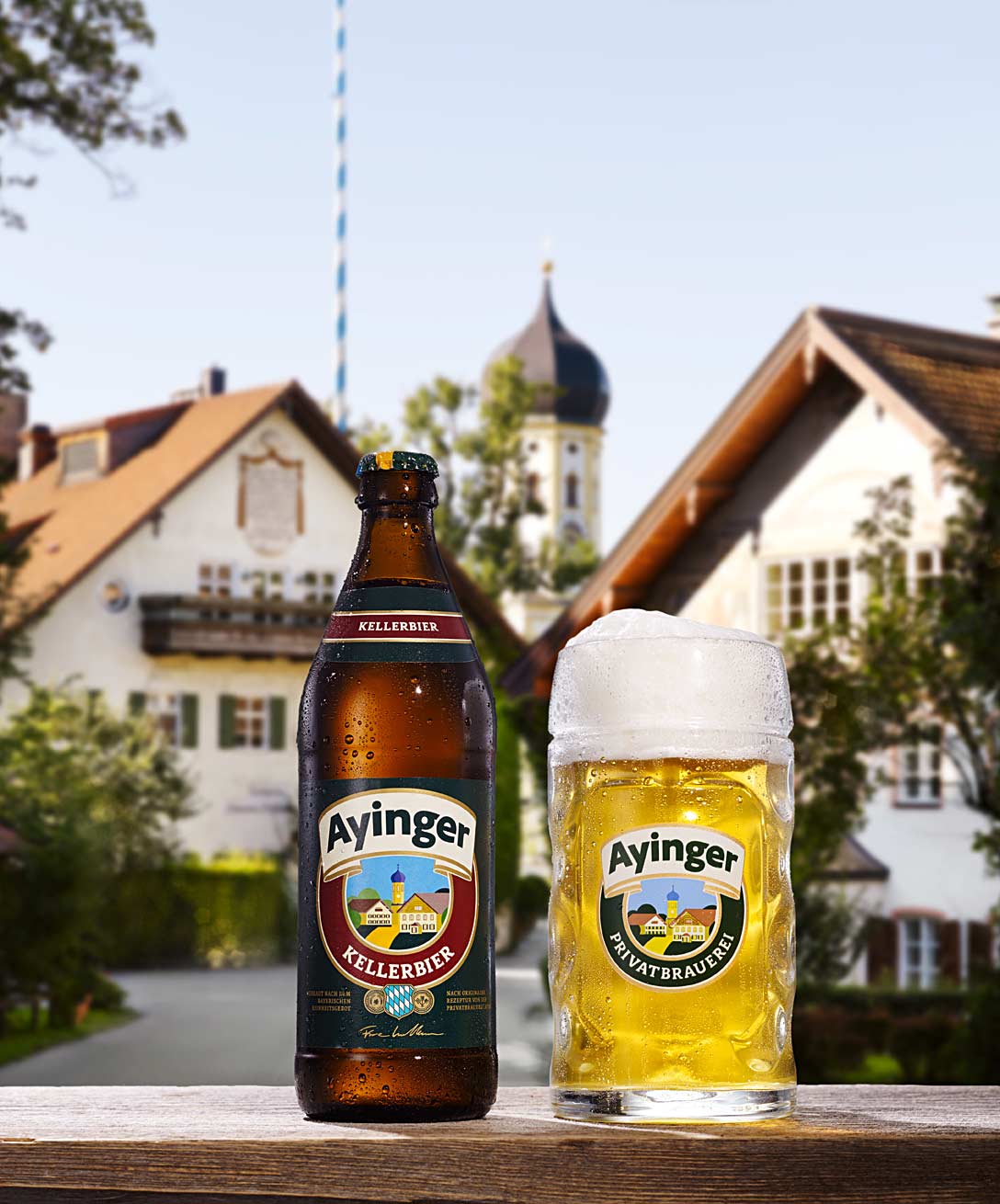 Brewed in honor of our brewery founder Johann Liebhard. With its fine yeast cloudiness and pleasant bitterness, it is reminiscent of old Bavarian beer varieties.

According to old tradition it is not filtered. Thus, it retains many natural protein, yeast and hop components.

Our Kellerbier represents Aying's commitment to the high school of traditional brewing - a beer with original character, taste and aroma. 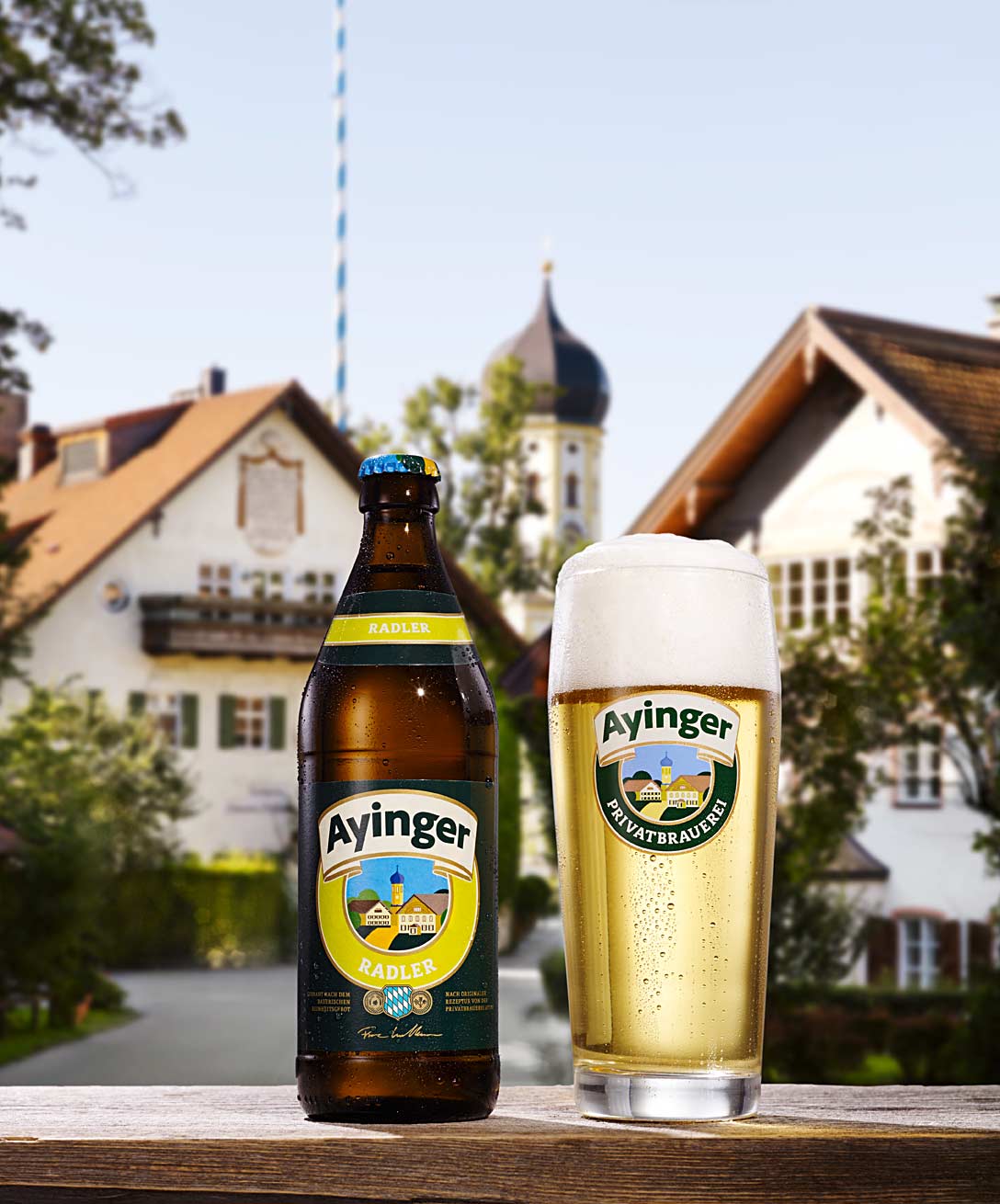 The surroundings of Aying are ideal for cycling Little-traveled dirt roads wind through forests and meadows, pass through small villages with beautiful churches and old farmhouses, and many places invite you to linger. But mountains and valleys can make you quite thirsty! That's why we offer all cyclists, but also beer connoisseurs, our Ayinger Radler - a mixture of Ayinger Lager Hell and lemonade. 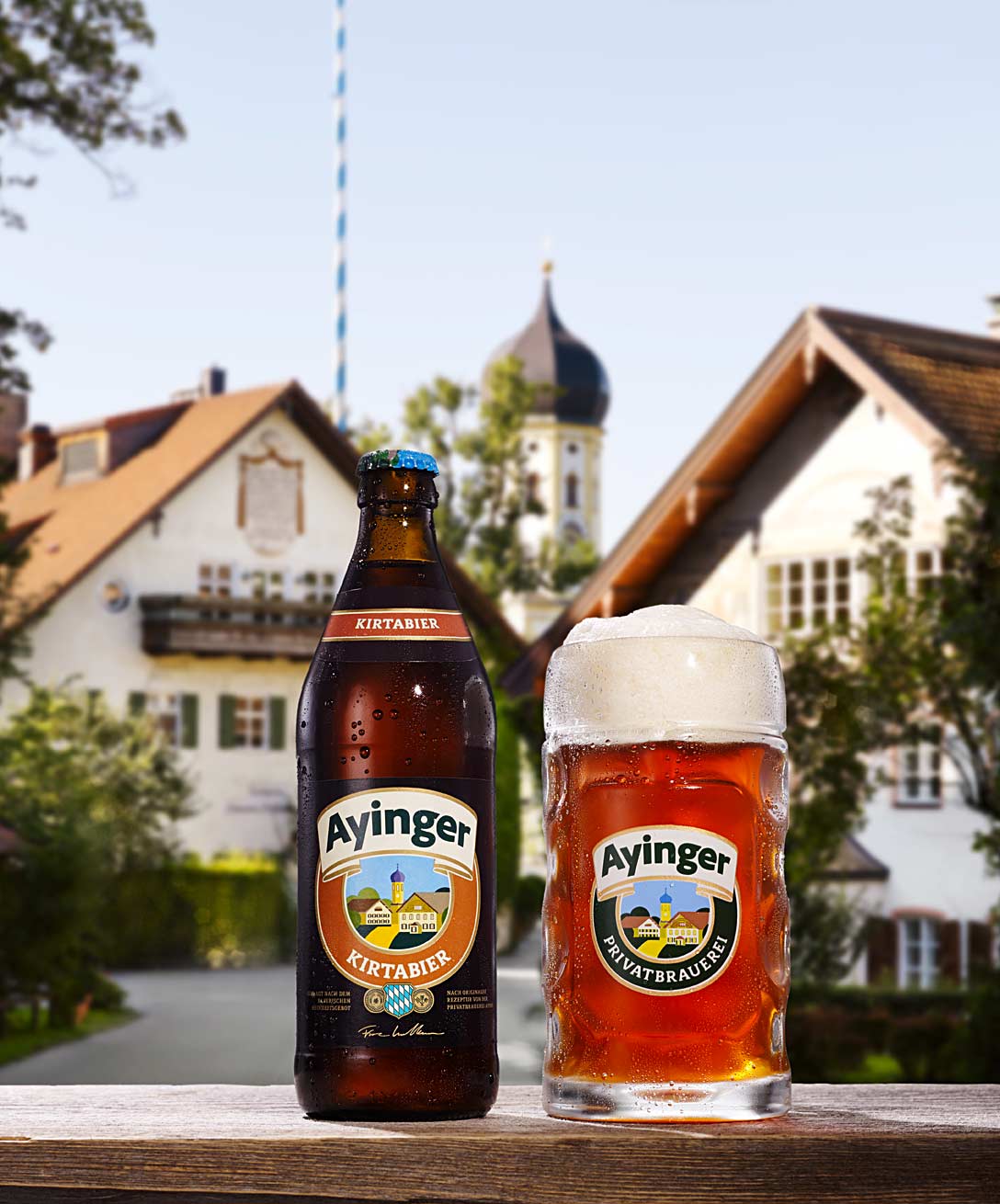 This naturally cloudy special beer is brewed according to an old tradition and served at Kirchweih, one of the most important Bavarian holidays. The warm, copper-brown color and the malt-aromatic taste are produced by the two-mash process with pouring from three different malts.

Special is the light aroma of oranges, ripe apples and nuts - the right beer for the golden October. 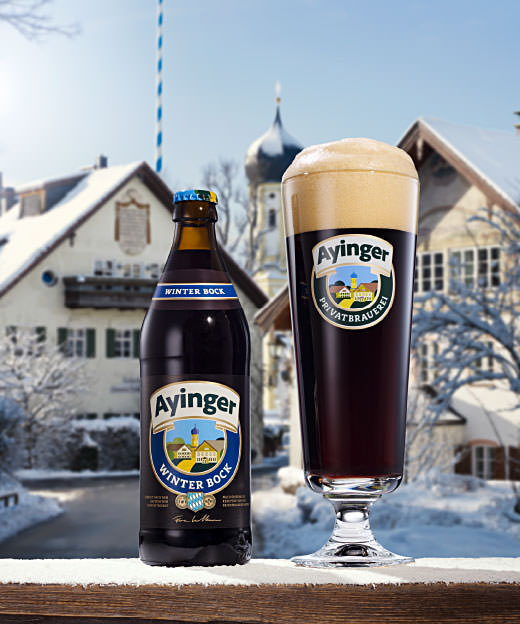 We serve this dark doppelbock of chestnut-brown color exclusively in the period from November to the end of January.

The complex three-mash process, the use of four types of malt and a storage time of 16 weeks ensure the rounded, full-bodied, malt-dominant taste.

Despite a high original wort content, there is hardly any of the heavy sweetness often found in doppelbocks. The attack is mildly full-bodied with an accompanying coffee note that dominates the aftertaste. A true taste experience for winter evenings by candlelight and open fire! 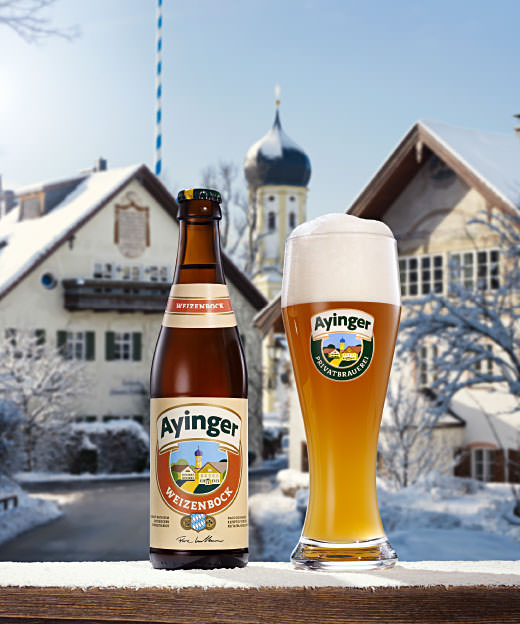 First brewed in 1995 to celebrate the sixtieth anniversary of our brewery, this refreshing wheat stout has long been one of Aying's winter classics. It has a beautiful golden yellow color, tending slightly toward copper. Four different types of malt provide the typical, slightly spicy taste and characteristic banana aroma.

The initial wheat beer sweetness quickly gives way to a full-bodied taste accompanied by a pleasant tanginess. With 16.5° original gravity, this is the "strongest" of the Ayinger wheat beers.